Khoi Vinh, art director of The New York Times online, was recently interviewed by design chronicler Stephen Heller. Vinh, always thoughtful, is bang on with this comment about the shift from “designing inward to outward:”

We’re entering a new era of design where the brands and experiences we create are no longer closely held, highly controlled cathedrals, but rather bazaars of commerce and conversation. Historically, graphic design has been a discipline that deals in control, in creating carefully managed, organized experiences that are then distributed to people to be consumed in whole. Digital media has upended that equation, and now—yes—the audience is an active participant in the process of design.

In fact, the process is now a conversation between designers and users.

That last sentence reminded me of MIT Professor Donald Schön’s observation that design is a “conversation with materials.” In many ways users have become “materials” as much as participants. We not only engage them explicitly through interaction design to create discrete features, but also in aggregate as social systems and platforms amplify their implicit actions to create value.

Flickr’s a good example of both these kinds of “conversations.” Their perpetual beta is nothing if not an active, explicit dialogue with members to remove friction from, or add features to, the system. And “interestingness,” their intelligent aggregator that surfaces the most promising photos from the database, is, in essence, a “conversation with materials” in that the algorithm constantly jockeys members implicit behavior into new value. It automates the conversation Vinh describes into a never-ending telepathic exchange that asks nothing of the user, if only to watch over their shoulder and make some notes.

If that notion seems tricky to grasp—or at least master—it gets even trickier when you think about designing “on brand.” Tomorrow’s designers not only have to think about how to engage their users and interpret their actions into features or systems, they have to consider how the results reinforce the brand—a particular kind of relationship—and the quality, tempo, and durability of the exchange.

Look at how LastFM, which deals with recording artists with whom you have no direct relationship, lets you “ban” a song from your playlist. Flickr has no such mechanism baked into a member’s photo page feature set. You can “fave” a photo, but you can’t explicitly use the system to denigrate a contribution. And why should you? Flickr relies on almost 70 percent of their users to publicly share their photos and build on their brand promise to “see the world.” If you share a photo—a little piece of you—are you incented to share more if visitors are actively encouraged to hurt your feelings?

The end game in Vinh’s comments is that we’re not just designing the bazaars of conversation—we’re designing the conversation itself. We’re specifying often intangible and implicit nuances of how people interact and create value together. 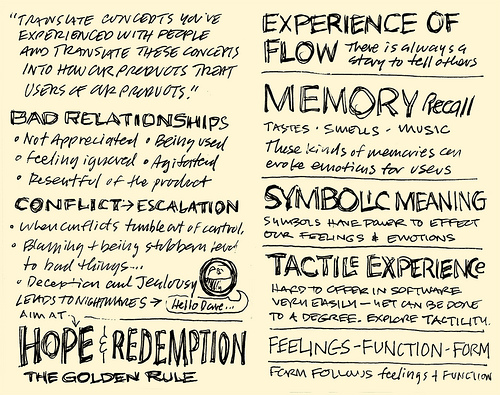 That’s hard work. If relationship design is ambigous and complex, so are the relationships between the designers. Interface, systems, interaction, aesthetics—rarely are these talents invested in one person who can birth a solution outright. Rather, in an ironic twist, the architects of participation must first be able to grok their own relationships and sort out “the thing” or “the thing about the thing” before they engage their community.